Rotherham has 2,328 children and young people aged 0-25 on an EHC plan

Number of New Referrals to the Service (including parents/carers, children and young people)

This indicates SENDIASS has offered IAS for 12.94% of CYP with SEND in Rotherham if each referral to the service reflects a new service user. This is an increase from last financial year (9.9%)

Number of referrals broken down into gender

The 2011 census indicated 8.1% of Rotherham’s population are from black and minority ethnic backgrounds. The main ethnic group being Pakistani and Kashmiri (3.1%). 86% of referrals to the service are from White English/British background. 3.8% are recorded from Pakistani background, 0.2% from a Gypsy Roma background. This data suggests there is a decreased access to SENDIASS from the Black and Minority Ethnic population from last period. More work needs to be done to publicise the IAS offer around this group.

While boys count for 50.7% of Rotherham schools population, in this period boys accounted for 70% of referrals to the service. This over representation of boys over girls has historically been seen nationally by SENDIASS services.

Service staff work alongside colleagues from Social Care. In this period the Service has received 11 new referrals involving a ‘looked after’ child (0.9% of new referrals to the Service which is a slight decrease from previous year of 1.34%

8 referrals were made to SENDIST against Rotherham LA within this timescale.

During this period 14 service users contacted the service with the sole purpose of gaining information, advice and support around SEND Tribunal. This is a small reduction from last period. 50 service users also specifically contacted SENDIASS around Mediation a large increase from last year (27), this may indicate that processes and the language used is becoming more common place and service users have more of a desire to work towards an agreement without the use of tribunals. As the service supported in 65 (an increase from last financial year from 42) mediation meetings, this suggests that calls coming into the service around Tribunal are also happy to try mediation first following SENDIASS advice. Advice given around Tribunals could include; the process and timescales, the need to consider mediation where necessary and how to action this process, the options available which may not result in a tribunal. This may include ways forward such as: looking in detail at the reasons why the LA has made the decision they have and how this could then be used to support processes in the future, utilising the timescales to appeal wisely to ensure additional evidence is available to support ongoing discussions with the LA via mediation or informal discussions, considering what the 9 support currently looks like for the child or young person at SEN Support and offering advice and support around further discussions with the school or setting.

During this period SENDIASS supported 3 parents through formal Tribunal processes.

During this period 67 mediation cases were entered into by the LA. SENDIASS supported 65 cases with mediation meetings although a few children and young people were also supported at these meetings too. This is an increase from previous period (42). Support at mediation may include things such as; preparation beforehand ensuring the service user has a clear understanding of the process, possible outcomes, and clarity around their situation and points to share/questions to ask. It could also include encouraging self-advocacy and where appropriate asking questions of the service user to prompt their thought process based on prior knowledge and discussions. SENDIASS also acts as a point of reference to the legislation around the EHC, mediation and appeals process which may consist of reminders around the relevant legal tests which would need to be considered if a tribunal were to be lodged.

Parents contacting the Service for the first time are able to have an in depth conversation with Sarah Lowe (SEND Advisor) about their concerns and receive detailed advice and information, this has been followed up in writing and posted to the parent. The majority of cases received a service within 5 working days.

Ongoing parental case work support is provided by Kerry Taylor and Rachel White. Steven Wadsworth and Maria Ridge have also supported parents during this period. Sally Thomas and Louise Mulligan/Leanne Taylor and Maria Ridge provide case work involvement for children and young people. A significant amount of casework involves actively engaging with parents/child/young person, schools and LA staff to prevent or resolve disagreements. The volume and complexity of case work has increased during this period. During this period 56.8% of parent service users went on to require more in depth 1:1 support in the form of ongoing case work involvement, following the initial in-depth conversation, advice and follow up written information being received. This is a significant increase compared to last period (31.6%). This information is supported by the level of commitment at level 3 in particular, the number of meetings supported and increase in mediations shows that case content has become more complex this year than previous years. There are also more cases this year being dealt with as a contact only.

Over the April 19 – March 20 period, the service has been contacted by 39 service uses requesting information, advice or support around Exclusions from school. (This is down from previous 2 years)

Breakdown of cases around Education, Health and Social Care 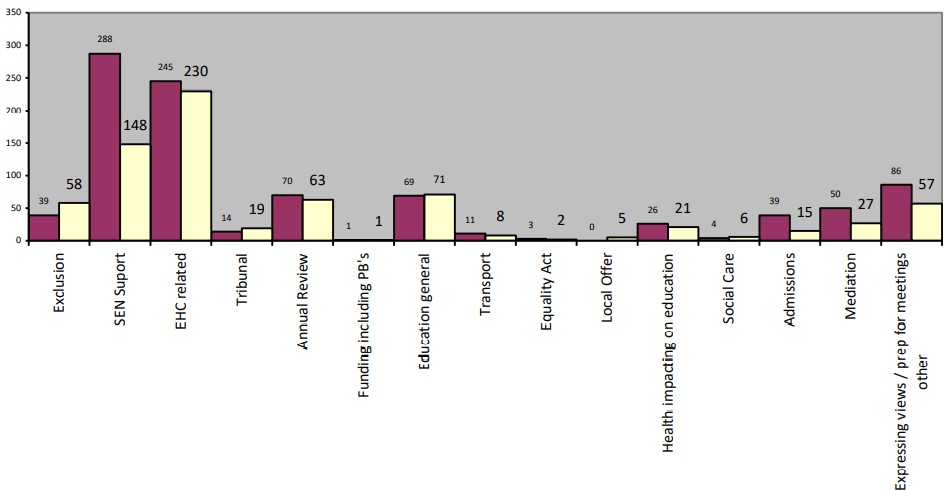 Note 2,328 children and young people have an EHC at the time of writing this report in Rotherham. This indicates that SENDIASS supported with 14.1% of the cases who have an EHC.

As the number of cases who are EHC based is significantly higher than most other areas and topics it is useful to see how this is broken down further.

During this period 69 parents attended 6 workshops on the topics of SEN Support, Exclusions and Annual Reviews. Feedback from these workshops was gathered.

Participants were asked the following questions;

The training was delivered at an appropriate pace

The information shared was clear

The training was helpful to your situation

You learnt new information that was relevant

The training was delivered in a safe space

You would recommend the training to other parents/carers

All returned evaluations stated that they either agreed or strongly agreed with the above questions with only 2 placed in the ‘disagree’ column. Below are some of the comments left by participants.

Working with Children and Young People 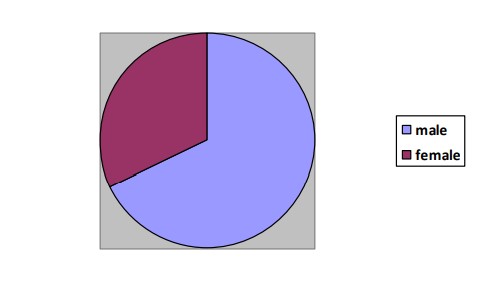 During this period a significant amount of time has been spent working with Children and young people with SEND to gather their voice and look at creative ways to do so. This work has taken place through the CDC contract.

Within the CDC bid we specified that we aimed to trial a range of innovative approaches to engage young people in co-production, in order to establish good practice in ensuring young people with SEND, and their voices, influence policy.

We planned to develop the skills and confidence of a core group of children and young people with SEND (The TiME Team Monitoring Group) to be ambassadors for coproduction.

We also wanted to find ways to engage more young people with SEND to have a voice.  The TiME Team wanted to make a film to support this work, so this would become a focus of the work and a way to promote the work following its completion.

The project worked with;

Number of those Young People identified as having SEND: 76

The outcome of the work resulted in a film made by children and young people with SEND which can be found on the following link https://youtu.be/WucVcYZNpSA and two reports which accompany the film, bringing the work to life. This work will continue through to next financial year.

Schools have a duty to inform parents and carers of SENDIASS at the time when SEND is identified. All schools, settings and SEND related services have received copies of our SENDIASS postcard to share with parents, children and young people. The service details are also placed on all LA letters with regards to the EHC process. There were no specific publicity projects using outside agencies during this period but staff continued to publicise the Service through Presentations to; ASC parent group, PEST early years group, Special Educational Needs Coordinator’s (SENCO’s), and Early years SENCO’s. 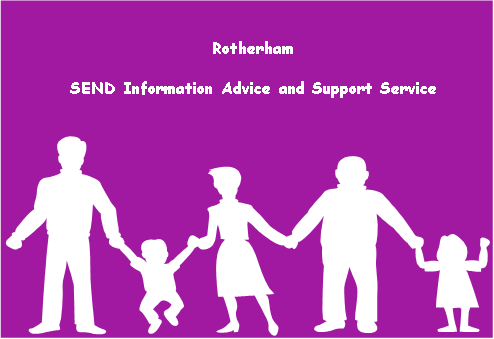 Rotherham SENDIASS has its own dedicated website which went live on the 1st May 2015. The Website is also placed on the Local Offer. Updates are added when appropraite.

Sessions: Included on multiple reports, sessions track how often the site was visited, and what actions were taken during each visit. A session defines a period of consecutive activity by the same use, and persists until a user stops interacting with the site for a period of 30 minutes.

Page views: measures how often a specific page is visited. (Example If a visitor visits Page A, goes to the homepage, and then comes back to Page A, it’s counted as two page views)